Moisture is the cause of cracks

Moisture and rainwater are the cause of many problems, including cracks. Rainwater easily seeps into foundations if they are not or poorly protected. Indeed, foundations are the pillar of all buildings and their good condition is an essential pledge of sanitation. Moisture and water infiltration often cause cracks that can appear as well as walls, interior or exterior, as on the floor. The climate in the Boucherville region is so changeable that it is essential to properly protect the foundations from natural damage.

On the other hand, the foundation crack is the cause of mold in the room. In addition, we noticed that in the Boucherville region, the gutters, which are often poorly placed, do not allow rainwater to drain out with certainty. This allows water to flow more quickly and easily along the walls and infiltrate the foundations.

Water seeping into walls is common, but sometimes it causes cracks. This is because water rots the walls, making them more fragile and more prone to cracking.

In order to avoid humidity, it is possible to install a French drains system which are perforated pipes that facilitate the flow of water. Drains are installed around the perimeter of your home. It is also possible to waterproof the foundations with an elastomeric membrane because this step is often neglected or it is replaced by a simple layer of tar, which is not sufficient in the long term. 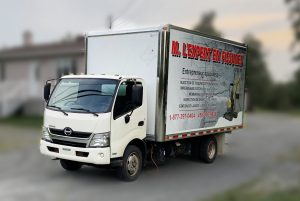 The different types of cracks and their repairs

There are two types of cracks: active or passive. Active cracks are caused by the wrong material used in the construction of your home. Pyrite is a material widely used in the South Shore region of Montreal and mainly in Boucherville. The problem is that pyrite swells on contact with moisture, causing changes to the foundation that can cause cracks to appear. Active cracks change and deteriorate over the medium term.

As for passive cracks, these will no longer grow since they have reached maturity. Their repair can therefore simply be reduced to a filling.

The injection method is often used to repair cracks. It consists of opening the V-shaped crack and then sealing it with polyurethane and epoxy. These two products provide long-term repair. In addition, their results are immediate and this technique can be used both outdoors and indoors.

For any kind of work in crack and foundations repair